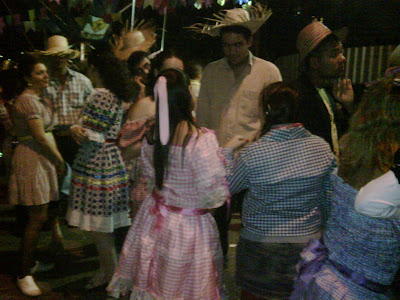 June festivals or feasts of the saints are popular celebrations that take place in several countries historically linked to the pagan festival of the summer solstice, which was celebrated on June 24, according to the Julian calendar (pre-Gregorian) and Christianized in the Middle Ages as " Feast Saint John. "These celebrations are particularly important in northern Europe - Denmark, Estonia, Finland, Latvia, Lithuania, Norway and Sweden - but are also found in Ireland, Galicia, parts of Britain (Cornwall especially), France, Italy, Malta, Portugal, Spain, Ukraine, other parts of Europe and other countries like Canada, United States, Puerto Rico, Brazil and Australia. 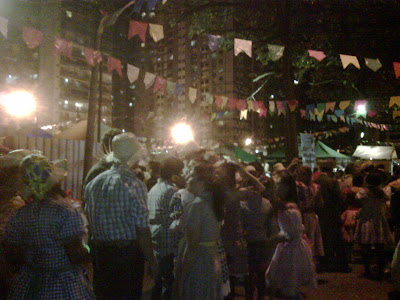 Of European origin, the bonfires are part of the ancient pagan tradition of celebrating the summer solstice. As the Christianization of pagan tree "evergreen" Christmas tree, the fire of the day of "Midsummer" (June 24) became, little by little in the Middle Ages, an attribute of the feast of St. John the Baptist, saint celebrated on that day. Even today, the fire of St. John is the common thread that unites all the European celebration of St. John (from Estonia to Portugal, Finland to France). A legend Catholic Christianize the pagan bonfire summer says that the ancient custom of lighting fires in the early summer had its roots in an agreement made by cousins Mary and Elizabeth. To tell Mary about the birth of John the Baptist, and get their help after the birth, Isabel had to light a bonfire on a hill. 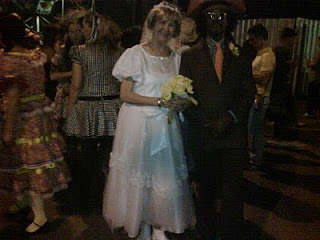 As Brazil can be divided into two distinct types: the feasts of the Northeast region of Brazil and the redneck party, in the states of São Paulo, Paraná (north), Minas Gerais (especially in the southand Goiás

In the Brazilian Northeast is celebrated with small or large parties that unite the whole community and many tourists, with plenty of food, and much wedding dance. It´s common to the participants of the celebrations they dress the backwoodsman, men with checkered shirt, patched pants with colored cloth, and straw hats, and women with colorful calico dress and straw hat , in the interior of São Paulo still maintain the tradition of conducting fairs and dances around bonfires , in Portugal there are camp with rocket, roast sardines are volunteers and basil, the popular parade marches through the streets and avenues, give themselves with plastic hammers and leek in the minds of people especially in children and when the boys want stick with single girls this is the culture in our Brazil !