Petrópolis is a municipality in the Brazilian state of Rio de Janeiro. It occupies an area of 774.606 kilometers ², with a population of 312,766 inhabitants  . The mild climate, historical buildings , and lush vegetation ,  are major tourist attractions . In addition, the city has a bustling trade and services, and agricultural production especially of fruit , founded on the initiative of Dom Pedro II ,it´s always has been  called the Imperial City. 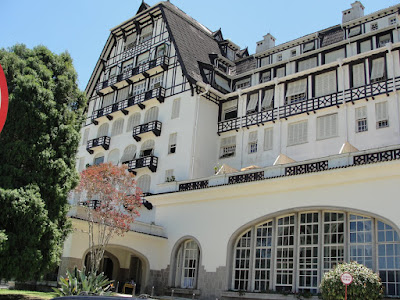 Quitandinha Palace store was opened in February 1944 and came into operation as a casino and hotel . The grandeur and  rococo holywoodiano style "attracted presidents, famous artists, business leaders and the cream of Brazilian society, who  were up until dawn at the casino tables the room was where the casino is. It has one of the largest domes in  the world  30 meters high and 50 feet in diameter, and whose architectural features had an architectural features ha a  sound effect  fourteen times, is undoubtedly one of major attractions of the place. The ceilings of some rooms are  8 feet high, and the lobby ,  lit with  huge chandeliers and a large star of Carrara marble floor . These are some of the luxury features . The  grocery store has a theater with three revolving stages, desks, boxes and stalls for 1,600 people, which hosts conferences, plays and concerts. It also has reading rooms that allow the installation of a computer system and simultaneous translation. 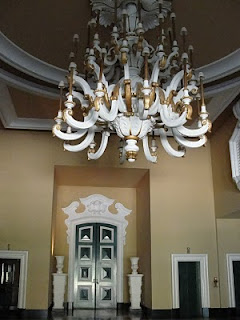 it has 50 million square feet and six floors, divided into 440 apartments and 13 large rooms with up to 10 meters. The dome of the hall ranks as the second largest dome in the world possessing 30m and 50m in diameter. In it´s construction there was a lot of sand  used from the beach of Copacabana. The lake in the entire length of its imposing facade has the format of the map of Brazil and was built as the only viable support in the event of an unexpected fire ,  stars like Errol Flynn, Orson Welles, Lana Turner, Henry Fonda, Maurice Chevalier, Greta Garbo, Carmen Miranda, Walt Disney, Bing Crosby and even a king dethroned (Carol II of Romania). And politicians like Getúlio Vargas and Evita Peron, when the American Conference of 1946. In its office was the signing of the declaration of war of the American countries to the Axis Powers during the Second World War. Is was where the 16th World  Conference Bandeirantes,held in 1957, which had representatives from 23 countries associated to WAGGGS (Word Association of Girl Guides and Girl Scouts) 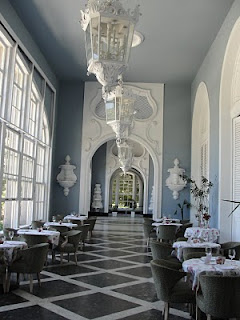 The Restaurant  inside the building 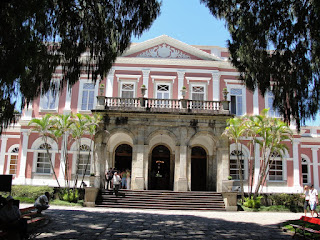 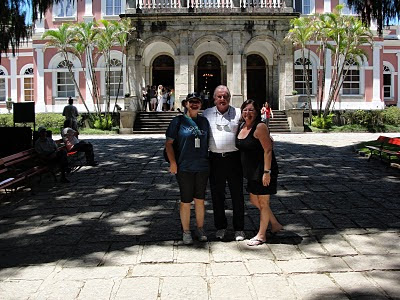 This is me with my guests from Texas
The Imperial Museum is located at the center of the city of Petropolis 80 km from the city of Rio de Janeiro
Particularly important are the imperial jewels  with the crown  Dom Pedro II  created by Carlos Marin especially for the consecration and coronation of the young emperor, then 15 years old, and the crown of Dom Pedro I  and many other rare pieces and precious as safe gilded bronze and porcelain offered by the King of France Louis-Philippe to his son Franz Ferdinand d'Orleans, Prince de Joinville, on the occasion of his marriage to Princess Dona Francisca, the gold necklace with emeralds and rubies insignia of the empire that belonged to Empress Leopoldina, and the necklace of amethysts the Marquesa de Santos, by Dom Pedro