TWO CANADIAN GIRLS AND THE REALIZATION OF A DREAM

If you want adventure you are in the right place , this is the city that you can have so much fun !

the girls decided they wanted to have this experience once in their life , so they took pre-arranged lesson on how to fly

Jackie waiting for the flight
me and Jackie at the ramp 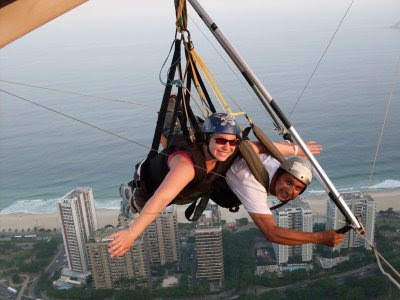 Located within the largest Urban Forest in the world , inside the Tijuca National Park , the free flight launch ramp on Pedra Bonita rock reaches out over the Forest at an altitude of 1600 feets

The mountain is 820 meters high , dipping into the Atlantic Ocean it is the highest coastal Mountain in the world voted by the Lonely Planet guide as one the five obligatory activities in Rio de Janeiro hang gliding is also one of the 1000 that we should achieve in our lifetime

The sensation of hang gliding can be compared to a type of dinamic meditation, and in an arc of 360 degrees , you can see the Corcovado , Sugar Loaf the Rodrigo de Freitas Lagoon , the multi-colored Forest , the Rocinha Favela and on the other side the Barra da Tijuca Beach and Gavea Rock , their flight was very safe and the landing was awsome .

The plans for our day with Diana were to go to the Statue of Christ Redeemer and also go to hike in Tijuca Forest Park .However we ended up doing so much more ! she was so enthousiastic and encouraged us to take every oportunity .It was the most amazing experience and we would have never been able to do it If she had not been so encouraging Jackie and Janelle